As a small company active in technical-scientific computing we were interested in up-scaling our computational resources. We could either invest in hardware or in exploring cloud computations. As described in the book ‘The Big Switch’ by Nicholas Carr investing in hardware is quickly becoming outdated and computational power is likely to become a commodity. In view of these developments we decided to participate in a pilot project supported by CVIS to explore the possible benefits of this approach.

With the help of CVIS the open source wave prediction model SWAN version 40.91A of Delft University of Technology (http://www.swan.tudelft.nl) was compiled as an MPI application using the Intel 11 compiler under the Unix operating system at the HPC cluster at Hartree computational centre in the UK. In addition, WinSCP and putty were installed to access the remote computer.

The purpose of the pilot project was to determine the ease of transferring (compressed) data files to and from the remote computer, to test the consistency of computational results with our own computer based results, and to test the speed and scalability of the computations using varying amounts of processors. 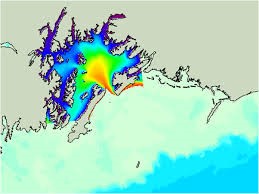 Transferring data to and from the remote computer turned out to be easy, only hampered by the speed of our own internet connection. Consistency tests were successful in the sense that both ASCII and binary files were compatible with our own data files, and very small differences (less than 0.01%) in results occurred due to rounding off errors due to differences in hardware. Comparison of speed tests with a 32-processor system (double Intel(R) Xeon CPU(R) E5-2650 v2, 2.60 GHz with multi-threading) showed that the remote computer was about 15% faster. The scripts provided by CVIS allowed us to set the number of processors to higher numbers. Tests with 64 and 128 processors showed that the SWAN model scales linearly. Especially, this last finding is important as it opens the way to up-scale the computational power of our company whenever the need arises.

Our participation in this pilot project showed that the service provided by CVIS for cloud computing satisfies our requirements for up-scaling our computational resources; eases of data transfer, compatibility of results and scalability with increasing number of processors.